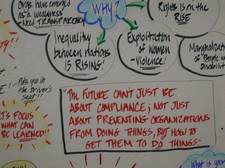 The Civicus Youth Assembly has left its mark on the Civicus World Assembly in this statment, presented to delegates in the closing plenary (as well as in young peoples contributions throughout the event).

At one point – with the TerraViva news reporting a 'Youth Rebelion' , and many of the young delegates at the world assembly disaffected and despondent – it looked like the positive step of inviting young people as active participants to the Civicus World Assembly 2007 was going to be seen as a bad mistake. But, the dedication of a core of young delegates to bring a positive youth voice to the centre of the Assembly, a committment to collaboration that far surpasses that seen between many NGOs, and late nights huddled round a laptop screen meant 2007 can be seen as a significant step forward for Civicus, laying the foundations for further and deeper youth engagement in furture World Assemblies.

This said, the process that led to the young peoples declaration was far from perfect, and throws up crucial learning and a reminder that in all participation, especially young peoples engagement – holding the right principles at the core of all planning is crucial.

The notes below try to explore some of the difficulties youth involvement in the World Assembly faced, and to suggest some possible (but not definitive) approaches to tackling these. The tone is of contructive criticism, and I should start with the strongest celebration and commendation of Civicus's strides forward in making it to this point, bringing together an impressively diverse group of young people and committing to the involovement of developing involvement of younger generations in it's work.

The challenges began in the Civicus Youth Assembly – a two day gathering of 130 young people from 65 countries. Day 1 of the programme consisted of near-back-to-back hour long workshops exploring particular issues in development. However, these sessions simply led into a short feedback plenary, and the issues discussed in them were not woven into the later programme in any way. Such short workshops gave neither the space for an introduction to an issue for the unitiated, nor time for in-depth discussion by those already aware of or working on the issues – and without a clear outcome led many participants unsatisfied.

Suggestion: Create a speed-learning series of interactive introduction presentations (given by participants) where a breadth of issues can be covered in 15 minute slots, and then invest two-to-three hours in longer in-depth sessions exploring a limited number of issues in depth – with a clear 'question' for those sessions to consider. The lack of clarity about purpose continued to dog day 2 of the Youth Assembly, and the three-hour session on 'participation' – far from resolving the challenges – deepend the problems and left a legacy of confusion which hampered youth involvement in the rest of the World Assembly. The Participation sessions in the Youth Assembly programme were introduced as a chance to explore three different methods of participative dialogue – and with external fascilitators the group was split arbitarily into three. I can only reflect on the sub-group I was in, but therein the piecemeal issuing of instructions meant that by the end of an hour of break-out time, we 'discovered' that we were to perform a tableaux communicating a bullet pointed 'issue' affecting young people, and that this issue was to feed back into selecting a set of youth priorities out of the Youth Assembly. Not only were the methods chosen inappropriate for the short time available (trying to develop participative drama in 20 minutes with an international group) but we were given no clear idea of where our inputs were to be used.

Comment: All participation should be based on core principles of openness, informed consent and transparency. Where there is not time for a process to be used effectively, it should not be used. Where a question is asked of participants (e.g. 'Identify the key issues facing young people in your area?'), it should be clear how the answers will be used – and what other questions they go towards answering ('E.g. What are the top issues for young people globally?') – and if this isn't possible prior to the first questions being asked, there should be opportunities to modify answers when the 'big picture' is introduced.*

I was greatly disappointed by the Participation Sessions at the Youth Assembly – as they were a real missed opportunity. That the '9 point list' they led to lacked legitimacy was, however, the spark for young people to really come into their own as effective collaborators, salvaging the 9 points and bringing a coherence to them in the World Assembly… and more on that in a moment.

Suggestion: The idea of a set of outcomes from the Youth Assembly needed to be build in from the start, and open to negotiation throughout. Processes suited to the outcomes sought should have been used, and participation made a 'thread' running through the Youth Assembly, not something that can slot into a three-hour session.

The articulate are over-empowered by poor processes 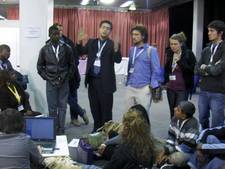 As confusion about the 9-points developed in the Youth Assembly participation sessions grew during the World Assembly, a number of Youth Delegates began work to redraft the points and work them into a coherent declaration. Without clear meeting space of sceduled contact of youth delegates, the group that formed was relatively ad-hoc, although it was collaborative and sought to include all those who were interested in taking part. This fluid group worked through Thursday and late through the night on Friday – regularly checking in with a wider group of youth delegates to gather suggested changes to the text of the document. The final declaration was an immensly positive product.

However, I have the strong impression that the strongest influences on that text will be the voices of the most articulate in the group – those with the stongest English, and the greatest experience of 'essay writing'. This is not to say that other voices did not impact the declaration – but it does suggest that in the absense of an inclusive and well designed participation process, the articulate and confident voices shape the text.

Comment: Participation processes need to be concious of power and influence and how to be inclusive in light of the way in which language skills, experience and confidence will impact on these. We 'fell back' on creating a declaration, because we didn't create the space to explore other possible products of the Youth Assembly and youth involvement in the World Assembly – and had we really engaged with creative participative processes we may have ended up with a very different mark left by young people on Civicus 2007.

Suggestions: More 'induction' or scene setting information is needed for all delegates about youth involvement (at least while we are in this transition period before youth involvement is fully mainstream…). That might be as simple as a page in the printed programme giving a welcome, or it might be some specific sessions on youth participation and engagement early on in the World Assembly programme. Perhaps a young-delegate hosted 'youth hub' as a physical space in the delegates lounge would help create a structured meeting of generations that could break-down barriers throughout the assembly…

I've just found a copy of 'Civil Society Legitimacy and Accountability' in my bag which I picked up from outside a session at the Assembly on one of the last days. After reading just three pages I've already got a far better handle on the accountability focus of the events – on the problems the assembly was addressing. Why didn't I read this before? Well – partly because Youth Assembly delegates were not briefed on the briefings – and when we discovered that reading them would be helpful – we couldn't get hold of them…

Suggestion: Make sure Youth Assembly delegates get clear information about all the briefings and papers that might be relevant – and if if is felt these are too involved to be 'light background reading' – explore whether some of the 'Youth Assembly' induction can be used to unpack key issues before the main Assembly – so that a youth perspective can be input into the discussions of these papers…

Get creative and intercultural

I have a confession. I left the World Assembly a day early. Youth Hostels are great places to stay most of the week… except Fridays… then the singing till 5am can cause tiredness in even the most resilient… and turning up to a really interesting sounding session on two hours sleep, only to find it is three-hours of dry presentations is enough to finish anyone off.

The World Assembly brings together over 100 different nations, and many more cultures – so why is there so little creative space? Space for storytelling, music making, visual arts and craft activities. On Thursday I went on a 'learning exchange' to the Village Story Telling Centre and in the informal space that afforded had some of the best conversations of the whole Assembly, significantly leading to some of the strongest networking I was a part of.

Suggestion: Create creative spaces around the World Assembly. Rooms or corners where people can gather around the arts and share in informal conversations and relationship building that strengthens the bonds of civil society, breaks down cultural and intergenerational barriers, and, um, well, is fun. 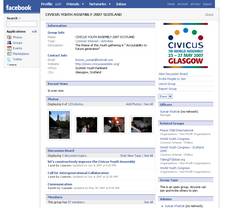 I took part in a few discussions on the Civicus Assembly website forum before the event, and I tried to encourage social media use at the Assembly – but by-and-large I've found the Assembly appears, at least from the persepective of a non-member of Civicus, to be a storm of networking activity, in a year of relative calm. Social media could provide a powerful way of laying the foundations of conversations before the event, continueing conversations beyond the event – and helping make sure networking is structured and supported.

Suggestion: If pre-event materials make clear reference to online discussion spaces, or social bookmarking 'tags', and the conference programme re-iterates those messages – then over time a 'social media' aspect to Civicus could emerge as a key element of the communication, discussion and networking mix…

2 thoughts on “Civicus Assembly in Review”