Making sure those who have consulted by government (local and national) can know what has happened in response to what they said is important. Far too often groups are disaffected by the lack of feedback after participation processes.

The catch is, change does take a long time. And identifying the impact of this particular consultation on a decision that finally gets made a year later – and then telling everyone who inputted into the consultation about how their views have influenced an outcome (or not) – seems a near impossibility! 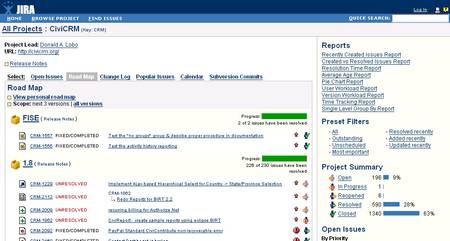 But as a contributor to an open source software project I've got access to an online system where: I can track how a call for proposals led to an idea being raised; I can see the initial discussion of that idea; I can see how a dialogue in the developer community decided not to priotise it right away, but to put the issue on hold till after other things were dealt with; I can track how it was then picked up again – combined with another outstanding issue – and assigned to an individual or group to work on more; and then, I can see when the issue is 'closed' – either having led to change, or because it's been decided it can't be pursued any further. I can even get automated e-mail updates on every stage of the process. (If you've not seen a good issue tracking system in action, follow this link through to see one example in action…)

4 thoughts on “Replacing local democracy with an bug tracker…”