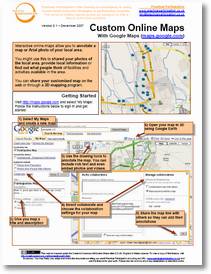 These two one page guides were written for the Young Researcher Network launch conference where they were used as part of a session introducing social media tools for young researchers.

I've always found geographic and mapping visualisations to be really helpful in participation projects (as in this series of workshops on the local offer), and so these two guides explore how Google Earth and the My Maps feature of Google Maps can be used to add an online dimension to community mapping projects.

In the 'Custom Online Maps – with maps.google.com' guide I've tried a new technique, picking up on the annotated screen shot style of Sue Waters (example here) to show the different options available on My Maps.

You can download 'Custom Online Maps – with maps.google.com' here as a PDF for printing, or if you want to edit and adapt a copy, grab the original word file here. 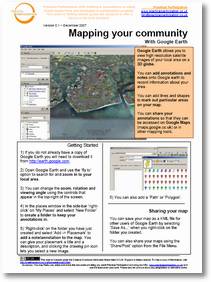 The 'Mapping your community with Google Earth' guide explains:

Google Earth allows you to view high resolution satellite images of your local area on a 3D globe.

You can add annotations and notes onto Google earth to record information about your area.

You can add lines and shapes to mark out particular areas on your map.
You can share your annotations so that they can be accessed on Google Maps (maps.google.co.uk) or in other mapping tools.

You can download the 'Mapping your community with Google Earth' guide as a PDF here, or as a word document for editing it is available here.

This guide is only a very brief introduction and is very specific in having been designed for a 25 minute mini-workshop introducing Google Earth. I'm mainly sharing here for those who were at the workshop and have asked for a copy…

The Young Researcher Network launch conference where the workshop took place also explored how you can use Flickr to create a photo map. There is an earlier guide that mentions that to be found here. 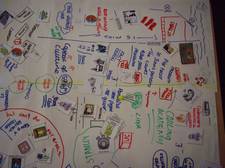 I recently co-designed and fascilitated a series of dialogue events for The National Youth Agency (NYA) between young people, officials from the Department for Education and Skills (DfES) and Parmjit Dhanda MP (then Minister for Children and Families). We focussed the dialogues, which were part of a broader UK tour by Parmjit Dhanda, on the Local Offer.

The Local Offer is a guarantee introduced through Section 6 of the Education and Inspections Act that gives young people the right to:

This should be out of school, and local authorities are responsible for making sure there is provision, it is well publicised, and that young people can access it. Young people should also be involved in influencing what is provided under the Local Offer.

As we had three-hours for the dialogues, the first two with mainly young people – and the third with extra DfES officials and the Minister, we designed a process that:

The resources we developed for the session are fairly flexible – and so I thought I would share them here – as they may well be useful to local areas exploring the local offer, or others running consultation processes related to activity provision for young people.

I’ve included a bit of description about how we used the resources – but you are free to take them and adapt them as you wish. If you do make use of them, I’d be really grateful if you could drop me a line or leave a comment to share news of how… (tim@practicalparticipation.org.uk)

I’ve also suggested possible modifications to the resources… if you do make any of these, please do share your updated resources as well…

We used this set of 10 ‘Local Offer Bingo’ cards as our ice-breaker name-game.

Simply give everyone a card, and ask them to talk to each other and to write down someones name against an activity if that person enjoys that particular activity. Each name can only be used once, and you need to find someone for each of the 16 squares on the card. The first person to fill their card (i.e. to find 16 people’s names) shouts Bingo!

After you’ve completed the name game – you can use it to take about the sort of activities people enjoy – and how they now have a right to positive activities in their areas because of the local offer.

The list of activities came from young peoples suggestions in an earlier NYA consultation on Youth Matters.

You can download the cards for printing as a PDF, or for modification as a Word Document.

Possible modifications: Add images to the bingo cards like in the local offer cards below…

These cards add a bit of colour, and list all 47 of the activities used in Local Offer Bingo along with a suitable clip-art image.

We used the cards for a community mapping excercise during which:

We also had some stickers with icons and words relating to different barriers that might stop young people accessing activities. Things like ‘cost’, ‘transport’, ‘time’, ‘traffic’ and ‘attitudes of adults’. For some groups we asked them to add these on top of the map to show where barriers to accessing activities existed.

The cards and mapping excercise were really useful in starting discussions and making sure that everyone could have a say, regardless of whether they were comfortable with the written word and verbal expression or not. I’m sure there are many other uses for the cards as well as in mapping; for example, using them to prioritise the different sorts of activities a group would be interested in having provided, or adding ‘costs’ to them and getting a group to try a budgeting excercise thinking about how they would ensure provision of a wide range of activities.

You can download the cards for printing as a PDF for printing, or for modification as a Word Document.

Possible modifications: Give each card a ‘cost’ score according to how expensive or resource intensive that activity is to provide (like in David Wilcox’s Social Media Game) and encourage a group to try an budgeting excercise to work out where their activity priorities lie.

This is a really simple tool – and I was suprised by how well it worked.

In our sessions we held an idea-storm with the group to ask:

(we used different ‘translations’ of the questions depending on the focus that had emerged earlier in the dialogues… but these are the overarching questions we were getting at).

With the results of the idea storm, we picked out key themes for further exploration and then held an ‘open space’ style series of conversations around these themes. We ended up with conversations on themes like:

We wrote the themes in the header box of these problem solving charts that we’d had printed on A1 before the event (rather than just scribbling them up on flip-chats) and, after introducing the charts, asked members of the dialogue to select which theme they wanted to discuss and to go over and have a conversation around it. As fascilitators, we just stepped back.

The charts appeared to really help most groups self-fascilitate and to record some really good points. In particular, encouraging the group to answer the question “What would this look like in practise?” with a narrative about how their ideas would work really helped them to work through the other boxes on the chart.

The charts could easily be used in other contexts and could be adapted with different questions – although I think that:

were important elements of the charts working as well as they did. They cost us just Ã‚Â£1 each to get printed on A1, which was well worth it.

You can download the chart as a PDF here, or as a Word document for modifying.

OK – so this isn’t a tool we created – but it was a tool we used. At each dialogue we took digital photos of all the flip-charts, community maps and recording charts and posted them on the photo-sharing website Flickr. That way we could easily share with others the authentic input given through the dialogues – with a clear accountable record of what went on…

Plus, if we were feeling really fancy, we could annotate all the photos, ‘geo-tag’ them to add them to a map to show the areas they represent, and could easily create a slideshow of them ideal for presenting to local authority officers or councillors with next-to-no extra work…