I read with interest the new Ada Lovelace report Participatory data stewardship: A framework for involving people in the use of data, not least because it connects two fields I’ve spent a good while exploring: participation & data governance.

Below I’ve shared a few quick notes in a spirit of open reflection (read mostly as ‘Yes, and…‘ rather than ‘No, but’):

The ladder: Arnstein, Hart and Pathways of Participation

The report describes drawing on Sherry Arnstein’s ‘ladder of citizen participation’, but in practice uses an RSA simplification of the ladder into a five-part spectrum that cuts off the critical non-participation layers of Arnstein’s model. In doing this, it removes some of the key critical power of the original ladder as a tool to call out tokenism, and push for organisations to reach the highest appropriate rung that maximises the transfer of power.

I’ve worked with various remixes of Arnstein’s ladder over the years, particularly building on building on Hart’s youth engagement remix) that draws attention to distinction between ‘participant initiated’ vs. ‘organisationally initiated’ decision making. In one remix we put forward with Bill Badham and the NYA Youth Participation Team we set the ladder against the range of methods of participations, and explored the need for any participation architecture to think about the pathways of participation through which individuals grow in their capacity to exercise power over decisions.

It would be great to see further developments of the Ada Lovelace framework consider the mix of participatory methods that are appropriate to certain data use contexts, and how these can be linked together. For example, informing all affected stakeholders about a data use project can be the first rung on the ladder towards a smaller number becoming co-designers, joint decision makers, or evaluators. And to design a meaningful consultation reaching a large proportion of affected stakeholders might require co-design or testing with a smaller group of diverse collaborators first: making sure that questions are framed and explained in legitimate and accessible ways.

Data collection, datasets, and data use

“Well-managed data can support organisations, researchers, governments and corporations to conduct lifesaving health research, reduce environmental harms and produce societal value for individuals and communities. But these benefits are often overshadowed by harms, as current practices in data collection, storage, sharing and use have led to high-profile misuses of personal data, data breaches and sharing scandals.”

It feels to me as though the report falls slightly (though, to be fair, not entirely) into the trap of seeing data as a pre-existing fixed resource, where the main questions to be discussed are who will access a dataset, on what terms and to what end. Yet, data is under constant construction, and in participatory data stewardship there should perhaps be a wider set of questions explicitly on the table such as:

Personally, I’m particularly interested in the governance role of data standards and structures, and exploring models to increase diverse participation in shaping these foundational parts of data infrastructure.

The report argues that:

yet, I wonder if this comes from looking through a narrow lens for projects that are framed as just about the data. I’d hazard that there are numerous social change and public sector improvement projects have drawn upon data-sharing partnerships – albeit framed in terms of service or community change, rather than data-sharing per-se.

In both understanding existing practice, and thinking about the future of participatory data governance practices, I suspect we need to look at how questions about data use are embedded within wider questions about the kinds of change we are seeking to create. For example, if a project is planning to pool data from multiple organisations to identify ‘at risk families’ and to target interventions, a participatory process should take in both questions of data governance and intervention design – as to treat the data process in issolation of the wider use process makes for a less accessible, and potentially substantially biased, process. 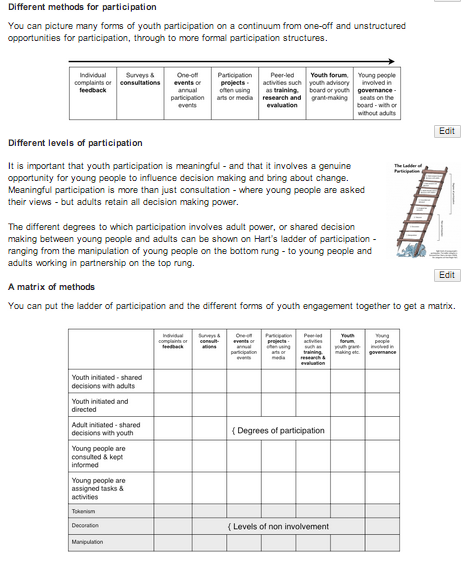 One of the things the matrix of (youth) participation model tries to draw out is the distinction between participatory modalities based on ad-hoc individual involvement where stakeholders participate directly, through to those that involve sustained patterns of engagement, but that often move towards models of representative governance. Knowing whether you are aiming for direct or representative-driven participation is an important part of then answering the question ‘Who to involve?’, and being clear on the kind of structures needed to then support meaningful participation.

It’s great to see participatory models of data governance on the agenda of groups like Ada Lovelace – although it also feels like there’s a way still to go to see many decades learning from the participation field better connecting with the kinds of technical decisions that affect so many lives.