I started writing this just before the Christmas break, but got interrupted by both festivities and flu. So, below, a slightly belated look back at 2019: where yet again my blogging has been far too sporadic.

Last Christmas eve, I was pouring over the newly released details of a £100m+ cost increase in the contract for the Javelin Park incinerator I’ve written about before. Over Christmas, we put together calls for an Independent Inquiry into the project, and come January, I was outside the plant, taking part in protests at the price rise.

Green group leader at the county council, Rachel Smith, says there as been 10 years of “lies and deceit” pic.twitter.com/zhYHB3O2V7

Since then, the County Council have been taken to court over the contract, putting the calls for an inquiry on hold (although questions were finally put to the Chief Executive of the Council in March, with updates on the court case expected in early 2020.

My other FOI adventures of 2019 have been less conclusive:

At the start of the year, I kicked off a part-time role as ‘Data Catalyst’ with Create Gloucestershire working on a number of fronts to support their internal data practices, but also to scope out ways to connect artists with debates around data. I shared some initial research back in February and in September had great fun co-facilitating a ‘Creative Lab’ at Atelier in Stroud, where we co-created a range of data-informed art works – from VR Design Teachers, to fabric chromatography creations that visualised data on school subject choice.

Much of March was spent working on final editing of chapters for The State of Open Data, and then, late in the month, heading to Paris for The Impacts of Civic Technology (TicTec) conference to present initial finings with my co-editor, Mor. An evening reception and hearing about digital democracy and participation projects at French National Assembly was particularly inspiring.

2019 was supposed to be a bit of a sabbatical year (learning point: I’m not very good at sabbaticals), but in late March and April I did finally get round to my two main goals of: (a) learning a bit about printmaking; (b) passing my driving test.

A wonderful two day workshop with Rod Nelson had me exploring woodcut designs exploring field patterns and the Stroud landscape.

And Bob Waters got me through my test first time.

I’ve promptly failed to do any more printing or driving this year, but at least I now know a bit more about how to!

May – State of Open Data Book Tour and OGP

May took me to the US, for a few weeks of #slowTravel by train around the East Coast, and then up to Canada, for the full launch of the the State of Open Data book. It was a real pleasure to catch up with old friends, and to take part in some really stimulating workshops, including a fascinating Belfer Center session on ‘Data as Development’ which gave rise to this note on the idea of a ‘a data extraction transparency initiative’.

Getting hold of physical copies of The State of Open Data book was a great moment: as at times the project has felt quite beyond delivery. I’m pretty pleased indeed with how it turned out – with contributions from 60+ authors, and many more reviewers and contributors.

I’ve still got a few hard copies that can go free to University or organisational libraries, so if you’ve read this far, and you would like one – do drop me a note.

In June I took another #slowTravel trip – heading to Copenhagen by train to facilitate a workshop for the International Aid Transparency Initiative’s technical community on the draft strategy.

Wrapping up a very enjoyable three days facilitating technical community & strategy consultation workshop for @IATI_aid at UN City in Copenhagen. Great to see the passion of the group for improving the data infrastructure of aid & humanitarian coordination #IATI pic.twitter.com/pZcHUoMeIE

This followed some online facilitation work for strategy dialogues earlier in the year. I’ve also had chance this year to co-facilitate an online dialogue for Land Portal: reminding me how much I enjoy this kind of blended online and offline facilitation work. Perhaps something to explore more in 2020.

In July, Rachel and I set out walking across the UK on Wainright’s Coast to Coast path – raising funds for  Footsteps Counselling and Care .

The weather and walk was stunning – and a real chance for reflection. 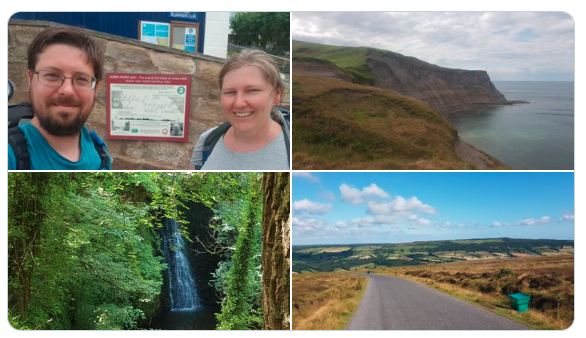 Besides the annual August pilgrimage to Greenbelt, it was a month of interesting UK projects – including work with the Government Outcomes Lab at the University of Oxford to scope out ways to improve transparency and data sharing around Social Impact Bonds, and contributing to a  (sadly unsuccessful) pitch by Open Data Manchester and Dsposal to secure innovation funding to build on their prototype KnoWaste standard.

In September, I had my first opportunity to work in-depth on a project with the fantastic Global Voices team – using AirTable to rapid prototype a database and workflow for tracking and analysing mainstream media, social media, and offline events through a local lens, and understanding the context and subtext of the media that platform moderators may be asked to make snap judgements over.

A three-day workshop in Skopje, Northern Macedonia, looking at coverage of the EU Accession talks, put the prototype to the test (and introduced me to some quite remarkable monumental architecture….).

I spent all of October in Italy, first as a residential fellow at the Rockefeller Bellagio Center in Italy, and then with a brief vacation in Verona, and quick trip to Rome to work with Land Portal.

Taking part in the Bellagio Center’s thematic month on Artificial Intelligence was quite simply a once in a lifetime opportunity. I didn’t write much about it at the time (as I was busy trying to pull together the outline of a new book proposal) and with an election called in the UK just as we were heading home, haven’t had the space to follow up. Hopefully some point next year I’ll be publishing a few outputs from the month.

However, I can’t leave my fellow resident’s work un-shared, so if I’ve not already signposted the below to you, do take time to:

I should also mention one of the other highlights of the residency: enjoying two shows, numerous tricks. and sage advice from ‘Magician in residence’ Brad Barton, Reality Thief – go see him if you are ever in the Bay Area!

I returned from Italy right into the middle of the biggest General Election campaign Stroud District Green Party have ever run, for the fantastic Molly Scott Cato. It was a month both spent both on the doorstep, and juggling spreadsheets – exploring the reality of values-based volunteer-driven political campaigning in an era of data.

Over November and December I was also working on the scoping for a potential new project – the Global Data Barometer – a successor to the Open Data Barometer study I helped create at the Web Foundation back in 2013. The goal is to explore how a 100+ country study could provide insight into patterns of ‘responsible re-use’ of data around the world – capturing both use of data as a resource for sustainable development – and efforts to manage the risks that the unregulated collection and processing of ever increasing quantities of data might create. I published the initial draft research framework just before Christmas, and will be exploring the project more in a workshop in Washington next week. Over 2020 I’m looking forward to more work on the Global Data Barometer, and with the Open Ownership team, as well as some further facilitation projects, and, hopefully, a bit more writing time! We’ll see.