[Summary: Handy guide to all the stages of creating a video of a youth project; from selecting equipment and sorting out consent; to planning, shooting and editing your film]

The Open University have been working on developing a new space in their  Practice Based Professional Learning (PBPL) environment for youth workers; and I was asked to put together a short guide on how youth practitioners can create video content to share insights into their own practice.

The result is ‘Shared Practice Through Video‘, which, in the spirit of sharing, is under a Creative Commons license and available for download as a PDF here.

You can also browse through it on Scribd over here. The guide won’t win any design awards (in fact, if anyone fancies taking advantage of the Creative Commons nature to remix it into a slightly more stylish design I’ll happily send you all the original material), but it does take you through all the stages of creating a video in the context of a youth project (or other project contexts for that matter).

I’ve been meaning to post these for a while: six ‘one page guides’ (ok, so actually one of them has two pages..) that I created for the Video Change project with Oxfam.

These are slightly different from the usual ‘one page guides‘ – but hopefully they may prove useful to others running in person or online training around the basics of making video for the web, or about using online video in activism and campaigning.

An overview guide created to step participants in the course through capture, transfering, editing and uploading their video content.

Step 5 of the guide is specific to Video Change – so would need changing for any other use.

Download the PDF here, or get the original Word Document for editing here.

Whilst we had some problems with getting the VodPod widgets to work properly we did use it in Week 2 of the Video Change course to invite participants to collect and share their favorite videos. There is definitely potential for VodPod as a tool for use by Youth Services and websites to clip and display some of the best positive video clips on the web direct to their websites and blogs.

Again, this guide includes some Video Change specific bits in the ‘challenge’ box – so you download the VodPod PDF here, or download the original word document to update this guide for your own settings.

This guide should be generic and ready to do without adaptation and includes five sites to search for creative commons and public domain footage.

So if you regularly try and explain to people how they can use stock footage in their video making you might find it handy and it is ready for download as a PDF here. Of course, you may want to download the MS Word file original and change the list of stock video sources to point to your own favourites.

This one page guide includes tips for upload a video to YouTube and for getting it seen by careful naming of the video and using the playlist, favourite and sharing features.

You can download the PDF here, or get the world file to edit from here.

Get the PDF here, or download the word file for editing and creating your own version.

6) Creating a Sisters on the Planet clip

Get the PDF to use it as it is, and download the word file if you want to play around with it for your own projects.

As with all the one page guides these are all licensed under a Creative Commons license to allow them to be adapted and re-used. However, please do note the request for these guides in particular that if you do find them useful that you credit Oxfam.org.uk and consider making a donation or taking a campaign action from here in return for getting the resources for free.

I was down in Devon last Friday at the county's fantastic Kongomana youth festival. Alas, however, I wasn't there to chill out and enjoy two days of activities and socialising. I was there along with Carl and Russel to find out what young people thought of Devon County Council using social network sites for youth participation (all part of the Youth Work and Social Networking project, and building on work I've been doing over here). 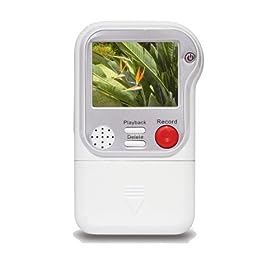 I'll share more later on about how we used magnets, the side of a bus, and little cut up bits of Bebo on cardboard to ask young people about the sorts of policies, rules and safety guidelines the council should use. For now, I just wanted to share a few quick reflections on using cheap video cameras for consultation.

What we did:
Devon County Council got hold of 5 Busbi Video cameras (Â£29.99) each which we could hand out to young people throughout the day.

The cameras are very simple to use, with an on/off switch, and big red button to start and stop recording. Even more useful, they've got a space where the battery compartment is (they run off AA batteries) where you can stick a question onto each camera so that the camera operator can read it.

We used questions such as 'What three words do you think of when I say Bebo?' and 'How could councils use Social Network Sites to help you get your voice heard?'.

During the chaos of running our paper-based consultation on social network site policy we were handing out the cameras to groups of young people to borrow for 5 to 10 minutes to go and interview their friends with the question on the back of the particular camera they had borrowed.

That way, so the theory went, we could get in views from a far wider range of young people. And the responses would be young people talking to young people – without the usual young person <–> strange adult dynamic that can occur during quick consultation exercises. The cameras were borrowed and the cameras came back. Throughout the day groups of young people were taking the cameras to go and record things.

We had to help one or two groups get started using the cameras – and had to keep turning them off as they almost always came back still turned on and draining the batteries (although the batteries all lasted).

We didn't get chance to watch any of the video coming back in until we were packing up – and the first few clips I watched were not very promising. Mostly video clips of the grass as people were running places with the cameras.

However, as I watched through the rest of the clips I found a lot of really good content. Simple questions like 'What three words do you think of when I say Bebo?' had gathered a lot more responses that 'How could councils use Social Network Sites…' – but between the five cameras there was a lot of content, and, importantly, content that we hadn't been hearing from standing around and talking to young people in our more static consultation activity.

Unfortunately, because we were at a festival event, and because I wanted to keep the video interview activity as quick for participants as possible, we didn't ask each young person if they would be happy for their video clip to go online – so I can't share the actual clips with you. However, I did write up responses to the question 'What three words do you think of when I say Bebo?' and then ran them through Wordle.net to give this tag cloud (the larger the world, the more often it was said): What did we learn about the method?

How could the idea be developed?
I'm keen to try using the same method again – but also to explore other ways of putting recording equipment into young people's hands with simple prompts – and then seeing what comes back.

I could imagine recording a short 'introduction to an issue' clip on the memory cards of the Busbi Video camera (the camera has a play button which plays back the last clip) and then sending the cameras in the post to young people across and area with a spare memory card. Young people would be invited by the video introduction to create a clip in response to the issue in question – and would be asked to send back that memory card.

I'd love to hear ideas from others about how to develop this peer-to-peer recording for consultation sort of model. What have you done in the past? Or what sort of thing would you like to do?

(Disclaimed: I have used an affiliate code on links to the Busbi Video on Amazon. There are other cheap digital video cameras on the market – and if you've got access to more durable kit already – the this method could work with that also. I just happen to have used the Busbi and found it to do the job for what I wanted). 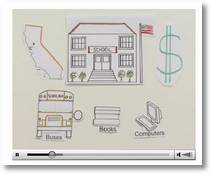 A quick pointer to two interesting sets of online videos that could be useful to youth workers and participation workers:

Youth-led media makers Catch 21 Productions have a YouTube channel where this week they've shared some short 'newsbite' video inputs on current policy issues. Nothing flashy. Just a really well scripted video perfect to introduce the issues in a group discussion. Here's their newsbite on sex education…

You can find more of the newsbites over here. And with YouTube you can subscribe to the channel to get updates by e-mail when new videos are available – meaning that if Catch 21 keep up the great work you can always have a video on hand for help exploring contemporary topics with any youth groups you are working with.

And I've recently discovered that explanation experts Common Craft not only offer the low-down on social media tools, but have also turned their technique to explaining School Finance in Calafornia. .

Ok, so unless you are in Calafornia this particular video may not be very useful to you – but it certainly raises questions for me about ways this style of video could provide stimulus and context for deeper consultation on complex issues.

What do you think? Have you seen other good examples of online video that could be used in youth work and participation work contexts?

(This post has two embedded videos in. If you're reading this in an e-mail update or an RSS reader you may not see the videos. Simply click through the title to the full post to view the videos.)